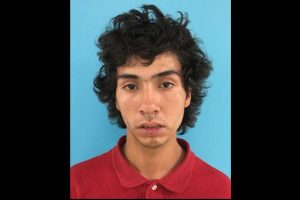 Sonora, CA – A report of a Jamestown man making threats to juveniles inside a Sonora home ended with the suspect’s arrest outside the house.

A call came into Tuolumne County Sheriff’s dispatch from two scared individuals reporting a threat allegedly made over a cell phone by 20-year-old Julian Torres. It involved the suspect saying he was going to shoot at the home, according to Sheriff’s spokesperson Deputy Nicco Sandelin.

While on the phone with the dispatcher, the victims spottedTorres in a vehicle outside the home.  Deputies rushed to the residence in the 13000 block of Sylva Lane to see Torres leaving. He did not get far and was detained for questioning.

Deputies determined that Torres had been harassing and stalking the two juvenile victims, whose exact ages and genders were not disclosed. Sandelin recounted, “One victim had gone to the other victim’s residence to seek safety. Torres discovered the victims’ whereabouts and threatened to shoot at the home, causing both victims fear.”

Subsequently, Torres was arrested for criminal threats on $25,000 bail. Due to the victims’ ages, Sandelin noted that no further information is being released at this time.