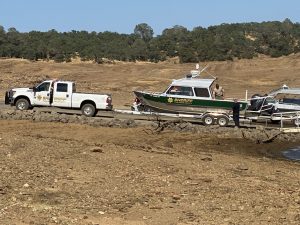 Update at 5:55 p.m.: Tuolumne County Sheriff’s officials have released some new details on the three drownings from this weekend. The two drowning victims at New Melones Lake on Father’s Day were recovered yesterday afternoon. Sheriff’s spokesperson Nicco Sandelin relays the names of the victims have still not been released. Additionally, there is no update on whether the body of Saturday’s drowning victim in Lake Don Pedro has been located or if the person has been identified. Sandelin says More information will be released as it becomes available. Further details on the drownings are below.

Tuolumne County Sheriff’s Office spokesperson, Deputy Niccol Sandelin says, “We ask everyone to avoid those areas while the recovery efforts are being conducted. In respect for the families of the recent victims, no further information surrounding the circumstances of the incidents, or identity of the victims, will be released at this time.”

Deputy Sandelin adds, “We express our sincerest condolences to the friends and family of the victims.”

Since early May there have been seven drownings reported in Tuolumne County. Deputy Sandelin says the sheriff’s office is encouraging everyone to take all safety measures while boating, such as wearing a life jacket.

We’ll pass along more information on the incidents at the two separate lakes when they become available.