What Makes a Plant Native? 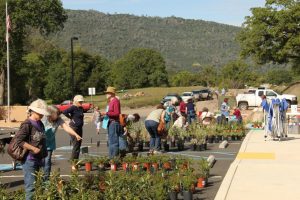 Plant seeds, borne on winds, jet streams across oceans, and by birds and insects, have been strewn all over the planet. Many species of plants in Australia were carried there on jet streams from Africa. Seeds blown from one place to another are considered non-native until they, over the many years or centuries, have become part of the balance of nature in the new environment.

The U.S. Department of Agriculture’s definition of a native plant is “a plant that lives or grows naturally in a particular region without direct or indirect human intervention.” Native plants have formed symbiotic relationships with native wildlife over thousands of years. There are three elements to consider when deeming a plant native: time, place and human involvement.

Planting appropriate natives in the garden pretty much guarantees success. But there are many misconceptions and myths about natives. One myth is that native plants have fewer disease and insect problems. Actually, some can be plagued with both. Borers and other insects can impact natives as well as non-native plants. Another myth is that native plants are always more desirable than non-natives. Yet, poison oak, native to the coasts and mountains of California, is not very desirable. Others, such as the California Buckeye could be poisonous.

Conversely, many non-native plants can be beneficial to the flora and fauna around your garden. Butterflies and birds benefit from natives and non-natives alike. Just because a plant isn’t native to the area, doesn’t mean it will do damage to the surrounding area of the garden.

The main thing to watch out for is an invasive plant. Invasive plants will escape the confines of your garden by producing seeds that are borne by birds or wind and will invade areas far from your garden. All the brooms (Scotch, French, Sweet, etc.), for example, are a major problem in the Sierra Nevada. They have muscled out many native species of plants that birds and deer depend on for food and nesting.

Yellow starthistle is one of the most serious invasive plants found in the Sierra Nevada. It is estimated to have invaded areas contained in 15 million acres in California and has had a devastating impact on native plant diversity, as well as being toxic to horses.

According to the Sierra Forest Legacy, “Wildlife species can be significantly impacted by abrupt changes in plant communities because they are co-evolved with and adapted to the native species in their habitats. Invasive plants may offer inferior nutrition, or maybe less useful as a nesting habitat. For predators, the increase in non-native plant species can impact prey habitat, thus reducing the prey densities in the impacted areas. In many areas, invasive shrubs and grasses increase the frequency and intensity of fires due to increased fuel load and greater susceptibility to fire leading to further ecological damage.”

Some natives to plant in a Mother Lode garden include penstemons and salvias. While they are blooming, they attract native pollinators to collect nectar and transfer pollen. Manzanita bushes provide shelter and food for native birds and insects.

Whether you plant native or non-native plants in your garden, make sure you check to see if they are invasive or not. There is a list of invasive plants on the University of California Integrated Plant Management site: http://ipm.ucanr.edu/PMG/PESTNOTES/pn74139.html. No one wants to have a negative effect on the environment that we live in, so don’t plant a pest.