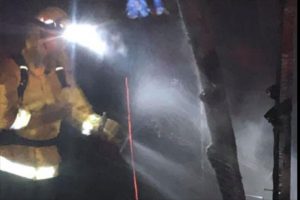 Rancho Calaveras, CA – As the temps have dipped at night some are turning to heat lamps to warm livestock, but that has led to two fires with some casualties.

Calaveras Consolidated Fire (CCF) reports two recent blazes were the result of that equipment. Offering the picture in the image box of the damage caused by the latest incident as a warning, it shows a large chicken coop that was damaged last month after an early morning blaze ignited and spread to a nearby stack of wood. Crews assisted by one engine from CAL Fire were able to knock the flames down before they could scorch any of the dry grass close to the coop.

CCF officials noted that this is the second blaze in the district that was caused by a heat lamp being used to warm animals. While no exact location was released on the other fire, two ducks were unable to escape the flames in an outbuilding and perished. In this latest incident, luckily all the chickens survived.