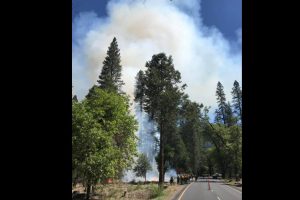 Yosemite, CA – Smoke will linger in Yosemite National Park through the Memorial Day weekend and into next week.

Fire crews on Monday (May 24) began ignitions on the Yosemite Valley Parkwide Prescribed Fire Plan on Monday focused on seven units east of El Capitan Crossover toward Leidig Meadow. The total to be burned was 439-acres.

On Wednesday conditions changed and were no longer favorable for burning operations to continue with only 182 acres burned relayed park officials.

Due to active sections within the burn area and for safety reasons the Valley Loop Trail segment between Cathedral Beach and El Capitan Cross is closed to travel. The only exceptions are for roads and parking areas within the Sentinel Beach and Cathedral Beach areas, according to park officials. Additionally, the Merced River downstream of Sentinel Beach is closed to watercraft until further notice.

Park officials note that fire personnel and equipment will remain in the area and continue to patrol and monitor the burn units. The parkwide fire plan encompasses 35 units totaling 12,114 acres.