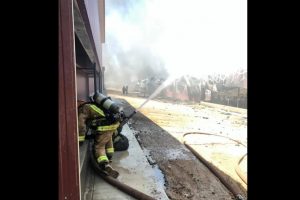 It has been dubbed the “Dunton Fire” and ignited just after noon Monday in the 8500 block of Dunton Road near Milton Road in the Farmington area, as reported here. The facility is part of the J.S. West Milling Company out of Modesto. Stanislaus Consolidated Fire spokesperson Eric DeHart reports that when firefighters arrived at the remote location with no water supply, one of two 22,000 sq. ft. buildings was 50% engulfed in flames, forcing them to prioritize how to fight the fire.

“We deployed our lines and put ourselves in between the building that was on fire and the one that was not,” explained DeHart. “We only used as much water as we had to, keeping the one not on fire cool and making sure no embers transferred over to it.”

Crews were able to knock down the blaze in about two hours, allowing Stanislaus County Consolidated fire investigators to begin investigating a cause. DeHart says one possible clue, “The buildings were under construction at the time, so construction-related activities were being conducted. That is certainly one of the causes they are looking at, but I don’t know that they have found a definitive cause yet.”

Crews were able to save the second building, but the other one was burnt to the ground with site property managers estimated the loss to be anywhere between $2.5 and $3 million.