Vehicle Broken Down, Don’t Leave It Along A Highway Too Long 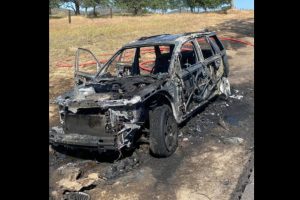 Sonora, CA – The Sonora Unit of the CHP is warning motorists that disabled vehicles should not be left for days on the shoulder of area highways, or thieves, vandals, and arsonists could strike.

The burned-out SUV in the image box had to be extinguished last week along Highway 108/120 near Green Springs Road in the Keystone area. CHP spokesperson Steve Machado says it is a good example of why not to leave a vehicle for too long, stating, “The vehicle had been reported parked there for some time and the next call we received was that the vehicle was set on fire.”

Luckily, the SUV was not occupied but further investigation uncovered it had parts missing, indicating why it had possibly been set ablaze. Regarding an uptick in this type of activity, Machado relayed “Our office has been made aware of incidents where some vehicles that have been left on the side of the road for an extended amount of time have been vandalized or burglarized.”

On the condition that a vehicle must be left on the shoulder, Machado advised, “If you leave it there, try to make arrangements so that the vehicle can get moved quickly and back on the road. Just so it prevents anybody from vandalism, or any parts being taken from it, or arson.”

In last week’s vehicle arson, while the flames spread to nearby grass, fortunately, crews were able to quickly put out the fire. However, Machado says with the temps heating up, in the future, it could spark a massive fire disaster.