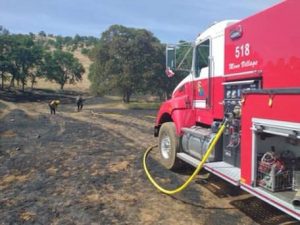 Solar Fire near the Sierra Conservation Fire in Jamestown

Update Saturday at 5:30 a.m.: CAL Fire reported that the Solar Fire was contained at 22 acres Friday evening. Further details on the blaze are below.

Update at 1:45 p.m.: CAL Fire reports that the Solar Fire burning near the Sierra Conservation Center has grown from 15 to 20 acres in size, but crews have stopped the flame’s forward rate of spread. The CHP reported that the blaze was started by someone mowing grass in the 5400 block of O’Byrnes Ferry Road near George Reed Rock Plant Road. CAL Fire relays that crews will continue to work towards full containment with additional resources including a hand crew being called to the scene. Once fully contained they will start the mop-up process that will last a couple of hours. CAL Fire has not given an official cause for the fire.

Original Post at 1:12 p.m. written by Nic Peterson: Jamestown, CA–Air and ground resources are battling a 15-acre vegetation fire that according to the CHP  was started by a lawnmower in some grass on O’Byrnes Ferry Road near George Reed Rock Plant Road and the Sierra Conservation Center. CAL-fire has dubbed this the “Solar Fire” and says it has a “dangerous rate” of spread with no structures currently threatened. An update will be provided as more details come into the news center.