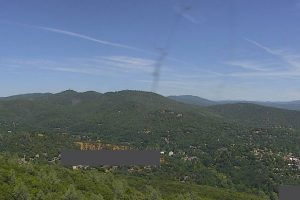 Fire near Lyons Reservoir in STF

Update at 2:55 p.m.:  The vegetation fire in the area of Lyons Reservoir on the Stanislaus National Forest has been contained at under an acre.

Update at 1:50 p.m.:  Forest firefighters are working a blaze located in the area of Lyons Reservoir on the Stanislaus National Forest. Forest spokesperson Diana Fredlund tells Clarke Broadcasting, “We received a report of a vegetation fire on SPI (Sierra Pacific Industries) land on the Mi-Wok Ranger District. Forest Service units are on scene. There is minimal fire activity. Firefighters will remain to extinguish any active fire and mop up the area afterward.”

The size is estimated at under an acre.  What sparked the fire is under investigation.

Original post at 1:27 p.m.: Tuolumne County, CA — Forest firefighters are heading to the area of Lyons Reservoir on the Stanislaus National Forest for a report of a vegetation fire.

CAL Fire reports it was radioed in by some loggers in the area stating the blaze is north of Highway 108. The image box picture shows a dark plume rising into the sky. However, there are no details on the fire’s activity or size or whether any structures are threatened being reported just yet. An update will be provided as soon as new details come into the newsroom.