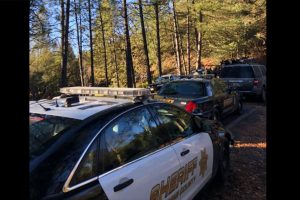 Update at 10:33 a.m.: One person has been arrested after the Tuolumne County Sheriff’s SWAT team was called to a Columbia Apartment Complex regarding persons holed up in a unit, forcing the evacuation of all the apartments and closing Columbia College Drive at Sawmill Flat Road.

The incident happened at the Wood Creek Flats located at 12065 Columbia College Drive. Sandelin details, “This morning our officers received a call for services regarding a domestic dispute. When deputies arrived the occupants of the residence refused to exit the residence. After a short time of being on the scene, the subjects inside the residence complied with orders and exited the residence peacefully.”

Sandelin says the two subjects inside were a female and a male and he was unsure if any other individuals were in the unit. The male was arrested. Sandelin did not have his name or know whether drugs or alcohol were involved in the incident. He says this is an ongoing investigation and no further information is being released at this time.

There are reports that a person is holed up inside one of the units and that all the apartments in the three-building complex have been evacuated by deputies. Sheriff’s spokesperson Nicco Sandelin tells Clarke Broadcasting that the entrance of Columbia College Drive is closed at the intersection of Sawmill Flat Road in Columbia. He adds that the sheriff’s Crisis Negotiations Team is also on scene and for the public to “please avoid the area.”

Sandelin relayed that he did not know the name of the complex, but that roadway leads into Columbia College. He also did not have any specifics on the incident and stated that no further information was available at this time.