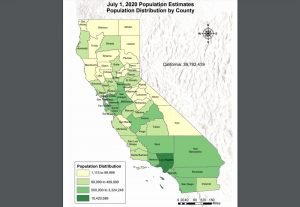 Sonora, CA — In the middle of the COVID-19 pandemic, many urban areas in California saw more people move out than come in, while the Mother Lode witnessed the opposite trend.

Statewide, 135,394 more people moved out of California than moved in.

However, the state’s overall population still increased because there were many more births than deaths. In July of last year there were 39,761,195 residents, and this July the number had increased to 39,782,419.

The Mother Lode counties, while having more people come then go, saw an overall decline due to more deaths than births, primarily due to an older population base.

The population figures were tabulated by the California Department of Finance.