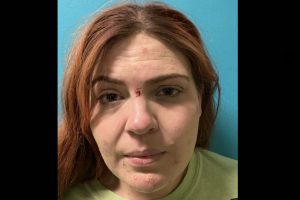 Sonora, CA – A fight at a Sonora motel ends with a woman’s arrest after her partner leaves her holding the bag.

Sonora Police were called to the Heritage Inn on South Washington Street Thursday at around 11 a.m. for a report of a physical disturbance. Before officers arrived, the male involved in the fight had fled. The female, 30-year-old Shelby Mary Putthoff of Merced, was still inside their room.

When questioned, she gave officers a fake name while using someone else’s identity. She also gave a false name for her partner.  Officers eventually determined that Putthoff lied about the identity of the man to avoid revealing his recent felony charges related to an assault.

The officer also learned Putthoff’s real identity, which revealed that she was on searchable probation out of Merced. A search uncovered drug paraphernalia and an identification card belonging to another person. Putthoff was arrested without incident for false impersonation of another, accessory to a crime, possession of drug paraphernalia, possession of the stolen property under $400, and violation of probation. Police did not disclose what the stolen items were.  Her bail was set at $20,000.