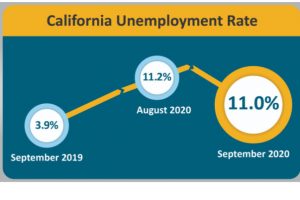 Sonora, CA – The unemployment rate dipped for both the state and the Mother Lode in September, according to figures released by the Employment Development Department (EDD).

The EDD report has the state’s rate down slightly from 11.2% in August to 11% last month. It also shows that California has regained about a third of the 2.6 million nonfarm jobs lost to the coronavirus pandemic in March and April.

In the Mother Lode, Tuolumne County saw a drop from 10.2% in August to 9.6% in September while Calaveras County inched down from 7.5% to 7.4%, respectively.

The largest job gains in the state were in the leisure and hospitality sector, with over 48,000 jobs as the state eased its COVID-19 restrictions, which accounted for half the overall gain of 96,000 jobs. According to the EDD that comes after experiencing the largest month-to-month loss of jobs in August.

The biggest September loss was in government jobs, mainly due to the U.S. Census shut down ending temporary jobs.

EDD relays that the state has paid $101 billion so far in unemployment benefits to workers affected by the pandemic. They note that about half of that is in regular state-provided benefits, which are now more than double what the state paid in the three worst years of the Great Recession combined.