Update: Serrano Fire In East Sonora Area Holds At Half An Acre 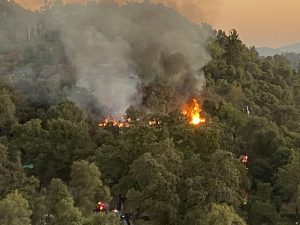 Update at 7:03 p.m.: CAL Fire has dubbed this fire the Serrano Fire. Spokesperson Emily Kilgore reports crews are getting a handle on the two outbuilding fires and have held the grass fire at a half an acre. They will remain on scene working towards full containment and mopping up into the night. What sparked the fire remains under investigation.

Update at 6:34 p.m.: CAL Fire spokesperson Emily Kilgore reports there are two outbuildings that are burning as well as a half an acre of vegetation. She notes there are other structures that are threatened. There is a CAL Fire helicopter is on the scene to help firefighters, the Tuolumne County Sheriff is also on scene to direct traffic and may limit access to Serrano Road but at this time Highway 108 remains open.

Thanks to community news partner Christine Robbins, Dave Stayer and Max R Terronez for their photos.

Original Post 6:21 p.m.: Standard, CA — CAL Fire reports they are responding to a report of a vegetation fire near Serrano Road and Mono Way in Standard. The CHP reports a shed is involved in the fire.

CAL Fire reports the blaze is in the 19600 block of Serrano Road, off Mono Way in Standard. There are no additional details regarding the fire at this time. Further updates will be coming as soon as more information is released.