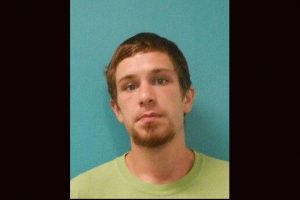 East Sonora, CA – Security footage helps to nail a Columbia man for theft at an East Sonora motel, a stash of drugs, and a robbery in Jamestown last month.

A report of a theft at the Aladdin Motor Inn on Mono Way in East Sonora sent a Tuolumne County Deputy to investigate. Once there, surveillance video showed a guest, 25-year-old Jared Mobley, stealing a chainsaw from the bed of a truck and hiding it in some nearby bushes. A knock on Mobley’s motel room door found him and 27-year-old Samantha Miccichi of Sonora inside.

Both were on searchable probation, and Jared had a misdemeanor warrant issued for his arrest. Backup was called in to help search the room with K9 Thor sniff out over 20 grams of heroin, and other drug sales and drug use related paraphernalia.

All the drug items belonged to Mobley, according to sheriff’s officials. So, a body search was done on him and a forged check was found in his pocket. He was arrested without incident for charges including possession of narcotics for sale, grand theft, possession of a forged check, and possession of drug paraphernalia. A small amount of heroin was found on Miccichi who was issued a citation and released from the scene.

Additional items found in the motel room were later determined to be about $150 in stolen merchandise from a “smash and grab” robbery at D&D Antiques on Main street in Jamestown on June 19th. That tacked on the charge of robbery to his string of alleged crimes.