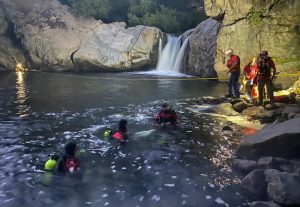 Groveland, CA — There was a drowning in the Rainbow Pools area near Groveland Tuesday evening.

The Tuolumne County Sheriff’s Office reports the victim was 19-year-old Alvin Reyes Jr. of Antioch. He reportedly went underwater and for an unknown reason failed to resurface. He was later recovered by search and rescue team members and the dive team. Deputies with the sheriff’s office also responded.

Spokesperson, Deputy Nicco Sandelin adds, “Our hearts go out to Mr. Reyes’ family and friends during this difficult time.”