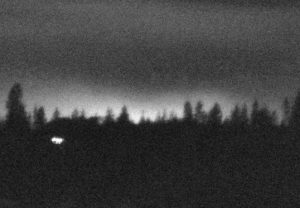 Glow from fire near Cedar Ridge

Update at 10:30pm: The Tuolumne County Sheriff’s Office reports that deputies have now completed notifying residents near the fire in the Rose Creek area about the advisory evacuation notices. It impacts the north side of Estailta Drive and those along Keltz Mine Road. The deputies are no longer needed at this time, per officials. Additional information about the fire can be found below.

Update at 10pm: Additional firefighters will arrive throughout the evening and early morning hours to help fight an estimated 2-3 acre vegetation fire in the Rose Creek area near Cedar Ridge. Evacuation advisories remain in effect for the north side of Estailta Drive and Keltz Mine Road.

Access remains a challenge because the fire is in a very secluded area. CAL Fire was initially the lead agency, but it is now being handed over to the Stanislaus National Forest. Air resources are parked for the evening, but they will likely be back in the air during the morning hours.

Update at 9pm: Due to the three-acre fire in the Rose Creek area near Cedar Ridge, the Tuolumne County Sheriff’s Office is assisting with an evacuation advisory for residents on the north side of Estailta Drive and Keltz Mine Road. Residents in that area should be prepared for an evacuation, and others are asked to avoid the area.

CAL Fire reports that it is in the Rose Creek area near Forest Road 3N11. Officials are working to gain access to the fire. It is not immediately clear if any structures are threatened. It is a challenging area for firefighters to access. We’ll pass along more information as it becomes available.