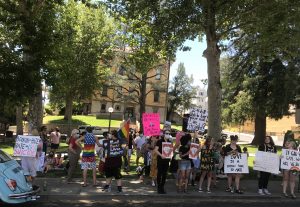 Sonora, CA — Protestors were out at Courthouse Park in downtown Sonora Saturday afternoon.

In recent weeks there have been a pair of Black Lives Matters protests in response to the killing of George Floyd, and organizers say today’s demonstration was in response to the Cavalry Chapel in Soulsbyville inviting General Jerry Boykin to speak at a men’s retreat taking place today. Posters placed around the downtown area regarding the protest point out that General Boykin has made various anti-LGBT and anti-Muslim statements. Boykin is the Vice President of the Family Resource Council, which the protesters note was labeled as a “hate group” by the Southern Poverty Law Center, because of its past rhetoric.

Signs at Courthouse Park read things like, “Sonora Stands For Love Not Hate, “Pray the Hate Away,” “Black Queer Lives Matter” and “Love Is A Terrible Thing To Hate.”

The Calvary Chapel put out a statement ahead of the protest on social media, written by Pastor Dave Atkins. He stated, “The goal of this group is to diminish our platform, quench our influence, as they see Pastor Miles and myself as men who hide behind our Bibles spreading hate. They are not happy that General Boykin is scheduled during “pride month.” Our intent was to never cause offense to our friends in the LGBTQ community. This is our 6th annual men’s conference, and General Boykin has been booked with us for a year. It is true that I support our keynote speaker and have promoted his arrival for some time now. It is also true that Boykin has made some comments in the past that are currently being used against him. One was an off-handed comment about the problem of having transgenders using girls bathrooms, and another regarding the clash of Sharia Law with the First Amendment. He has made public clarifications pertaining to those comments and you can research them on the web on your own time.”

The statement from Calvary went onto note that those coming to General Boykin’s event should refrain from doing so with a chip on their shoulder. It added, “Those protesting this event are not our enemies. They have the potential to be our future brothers and sisters who have yet to place their faith in Jesus Christ.”

The downtown protest got underway at noon.