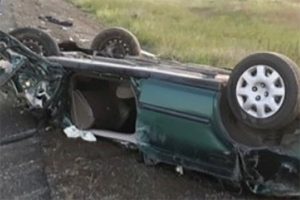 Tuolumne County, CA — The CHP is asking for the public’s help to find the driver of this flattened vehicle pictured in the image box that was involved in a rollover crash on Highway 108/120 early Friday morning near the Keystone area.

The CHP reports a passerby came upon the crash site near the J-59 intersection around 6 a.m., just in time to see a male jump into another vehicle that took off, leaving the flipped car blocking the entire roadway.  Officer Steve Machado recounts that the driver of a Honda Civic was speeding when they lost control of the car on a curve causing it to hit a dirt median and slide about 200 feet before overturning.

“It landed on its roof. It hit hard because the roof was completely crushed. The vehicle was almost flat on the ground,” detailed Machado.

The occupants were able to get out of the vehicle, escaping by busting open the driver’s side door, according to Machado. He adds that it is unclear if the person fleeing the scene was the driver or an occupant.

Investigators are still trying to determine whether the vehicle was stolen or if drugs or alcohol played a role in the collision. Anyone that might recognize the vehicle in the picture or have information on the driver or have witnessed the crash is asked to call the Sonora Unit of the CHP at 209-984-3944.