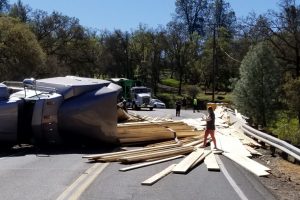 Update at 3:05 p.m.: While O’Byrnes Ferry road just reopened to one way traffic after a big rig overturned on a curve east of the Tulloch Bridge, the CHP has just informed Clarke Broadcasting that the roadway is closing again so a tow crew can work to upright the truck and remove it, which could take up to a half-hour. Also, the CHP is awaiting Tuolumne County Environmental Health officials who have been called to the scene to deal with gas leaking from the semi. Then the roadway is expected to completely reopen to traffic.

Update at 2:30 p.m.: The CHP reports crews have been able to remove the lumber blocking one lane of O’Byrnes Ferry where a big rig overturned spilling the load on a curve east of the Tulloch Bridge in Jamestown. That has allowed the roadway to open up with officers directing one-way traffic. The CHP is still awaiting Tuolumne County Environmental Health officials who have been called to the scene to deal with gas leaking from the semi. The drive suffered minor injuries in the wreck. Further information on the crash is below.

Update at 2 p.m.: First responders remain on the scene of a semi-truck that overturned on O’Byrnes Ferry Road at the Old O’Byrnes Ferry Road intersection east of the Tulloch Bridge in Tuolumne County. The truck spilled its load of lumber, shutting down the roadway. The CHP reports that gas is leaking from the truck and county environmental health officials have been called to the scene to deal with the spill. Their eta is an hour, which means the roadway will remain closed for at least that long. Further details regarding the crash can be viewed below.

Original post at 1:45 p.m.: Jamestown, CA — Emergency crews are on the scene of a big rig truck that has overturned spilling its load of lumber onto O’Brynes Ferry Road closing a section of it down.

The crash site is at the Old O’Brynes Ferry Road intersection on a curve.  The CHP reports the roadway has been shut down just before that intersection and at the Tulloch Bridge with officers turning traffic around. An ambulance has been called to the scene as the CHP is reporting injuries to the driver of the truck, but there is no word on his condition. We will update the situation as soon as new information comes into the newsroom.