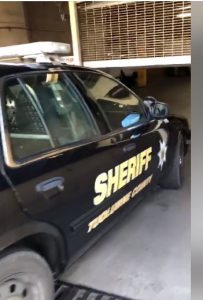 Update at 4:45 p.m.:  There is new information regarding the death of an inmate at the Tuolumne County Jail. 60-year-old Michael Hyde of Sonora was found deceased on Tuesday afternoon in his cell. Tuolumne County Sheriff’s spokesperson Nicco Sandelin tells Clarke Broadcasting,  “The preliminary cause of death is self asphyxiation, not hanging.” Further details on the inmate’s death can be viewed below.

Original post at 4:03 p.m.: Sonora, CA – An inmate has been found dead at the Tuolumne County Jail, but foul play is not suspected.

It was just after 1 p.m. on Tuesday that deputies found 60-year-old Michael Hyde of Sonora was found deceased from a self-inflicted injury inside his cell. Deputies immediately began CPR but were not able to revive him. While Sheriff’s spokesperson Nicco Sandelin stated he cannot give out specific details surrounding the cause of death, he did tell Clarke Broadcasting that no weapon or other inmate was involved in Hyde’s death. Regarding the timeframe between when Hyde took his own life and deputies found him, Sandelin relays that is part of the ongoing investigation.

The jail does have surveillance cameras throughout the facility and in the general area where Hyde was but not in every cell, according to Sandelin. He did not know if there is a video of the incident. The investigation is being handled by the Tuolumne County Sheriff’s Investigations Division.

Hyde was arrested on Saturday, Feb. 29th for a violation of a domestic violence restraining order. Sandelin did not know when or the circumstances surrounding Hyde’s original arrest.

Additionally, the sheriff’s office is also urging anyone who may need help to contact us at the Sheriff’s Office or call the National Suicide Prevention Hotline at 1-800-273-8255.