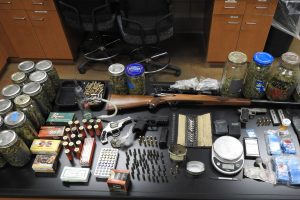 Paloma, CA — The Calaveras County Sheriff’s Office found drugs and numerous high ticket stolen items during a search of a home in the 6000 block of Messinger Road in Paloma.

The sheriff’s office reports, “During the investigation, deputies located two stolen off-highway vehicles, two stolen equipment trailers, and a large gasoline powered compressor which had also been reported as stolen. In addition, four firearms were seized including a handgun which was reported as being stolen.”

79 pounds of processed marijuana was also confiscated, along with counterfeit money, burglary tools and ammunition.

Arrested and taken into custody was 41-year-old Eric Gabriel Sosa of Paloma.