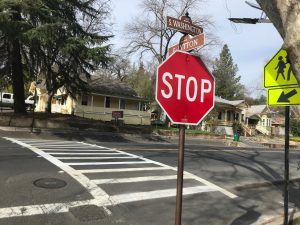 Sonora, CA – As traffic rushes by using the crosswalks at night along some areas of South Washington Street are raising concerns and the city of Sonora is taking action to shine some light on the problem.

Pedestrians and motorists may have noticed added safety precautions being taken at the Lytton Street intersection. With no streetlights, it is quite dark at night. Through a joint pilot project with staff in the city’s development and public works departments, a pedestrian street sign and solar reflectors system went up at the intersection on Wednesday afternoon. Also, the crosswalk was repainted to make it stand out as shown in the pictures in the image box.

After receiving several complaints about how dark and hard to see the crosswalk was, Community Development Director Rachelle Kellogg tells Clarke Broadcasting, “If it works well then we can look at possibly duplicating it at other areas of the city where there are issues as far as how dark crosswalks. So, that’s what we’ve been working on at the staff level.”

Already on other crosswalks along South Washington from Church Street to Restano Way, new reflectors have been put down. The work has been going on for the past three weeks, according to Kellogg. The funding comes from a street maintenance budget and the total cost so far for Lytton Street is $600. Kellogg adds, “We just swapped out for some new solar lights that are a little bit brighter than the ones we tried the first time. So, we’re going to give it a few days to see how well that works with the light being reflected into the crosswalk.” She then conveyed the next step,  I’m going to bring it to the [city] councils’ attention on Monday [at their meeting] so they can take a look at it and give us their opinions…If anybody in the public has any questions they can call us as well.”

The number to call is (209) 532-3508. The public is also urged to attend that meeting on Monday, March 2nd beginning at 5 p.m. at City Hall on North Washington Street in Sonora.