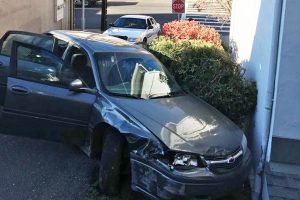 Sonora, CA – A witness watched in shock as a vehicle sped around a corner, heading down a one-way street then smashed into a building in downtown Sonora yesterday morning.

Grabbing their cell phone, they reported the crash to the Sonora Police Dispatch also detailing that the driver jumped out of the 2004 Chevy Impala and ran. The collision happened around 8:15 a.m. on Dodge Street and the building the car smacked into was the backside of the First Church-Christ Scientist.

The vehicle was traveling southbound on North Washington Street/Highway 49 when the driver turned onto Dodge. SPD spokesperson Krishna Livingston relays, “It is believed that due to high speeds he was unable to make the turn without sliding into a metal railing before crossing over into the opposite side of the street and into the corner of the building.”

An officer caught up with the driver, 26-year-old Brandon J. Silva of Columbia, who put up a bit of a struggle, but was quickly handcuffed, says Livingston. Silva also did not have a driver’s license. He was arrested for multiple charges, which included DUI, resisting arrest, and violating felony parole. Livingston adds that luckily nobody was hurt, and the building did not sustain any structural damage.