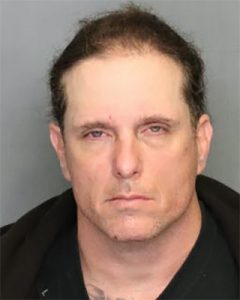 Update at 4pm: Stockton Police are providing a few more details surrounding the arrest of an owner whose dogs mauled two mini horses.

Stockton Police spokesperson Joe Silva, who provided a booking photo of Raymond Carringer, reports that the suspect is 45 years old and is listed as not having any fixed residential address. Transported to the San Joaquin County Jail following his felony probation violation arrest, he has not yet appeared in court.

The jail’s custody database indicates that he was booked just after noontime on the felony charge and a misdemeanor warrant of possession of a controlled substance. His bail totals $35,000 and the next scheduled court date is tomorrow at 1:30 p.m.

Original Post at 1:26pm: San Andreas, CA – Two dogs who were hidden away after allegedly killing a pair of mini horses are in custody.

According to Calaveras County Animal Services officials, their office investigated the reported attack that occurred on Monday in the 2600 block of Holmquist Lane in Valley Springs.

During the investigation, the officer in charge determined that both dogs and their owner, Raymond Carringer, fled shortly after the incident, and found a Stockton address linked to Carringer. The officer notified the Stockton Police Department, who located Carringer and the dogs at the property.

Carringer was arrested for felony probation violation. Clarke Broadcasting has a call into Stockton Police to determine what additional information may be available regarding the case.

Stockton Animal Services took the dogs into custody. Calaveras County Animal Services officials, noting their thanks to Stockton Police and Animal Services, are in the process of picking up and impounding the canines pending a probable filing of a potentially dangerous dog petition. As the dogs are not yet in custody, there are few details on them at this time.