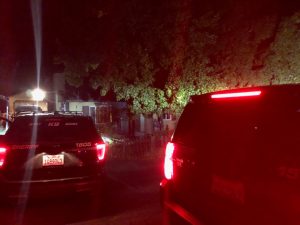 Last night, Tuolumne County Sheriff’s spokesperson Deputy Nicco Sandelin reports that deputies in Jamestown were investigating the area of Sixth Avenue when they spied 51-year-old Christopher Owens of Jamestown in the backyard of a residence. Knowing he was wanted on an outstanding warrant, they knocked on the front door.

While speaking with Owens, the deputies encountered 36-year-old Jared Fuson of Jamestown. On searchable probation, he admitted to having illegal drugs in his possession. A subsequent probation search of the home turned up over 38 grams of methamphetamine, 10 grams of heroin, over $500 in cash and various drug paraphernalia.

Three other local residents were arrested on drug-related misdemeanors.