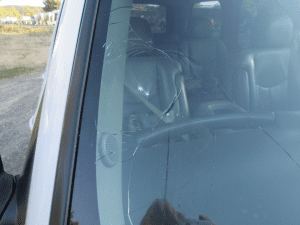 Damage to vehicle on Highway 108

Jamestown, CA — A man from Madera was taken to Tuolumne County Jail for allegedly throwing rocks at vehicles on Highway 108 in Jamestown.

A Sheriff’s detective responded on Friday morning and quickly spotted a person matching the description of the suspect, 34-year-old Joshua Williams. The Sheriff’s Office reports that Williams resisted the investigation and engaged in an altercation with the detective. A passerby stopped and helped the detective restrain Williams so that he could be taken into custody.

There were also several people parked alongside the highway with damage to their vehicles, and four of the people were able to positively identify Williams as the suspect. Over $1,300 in damage occurred to the vehicles. Williams was arrested for vandalism, throwing an object at a vehicle and resisting arrest.