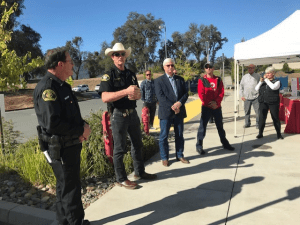 San Andreas, CA — First responders in Calaveras County received an upgrade that will notably help during times of emergency.

A ribbon-cutting ceremony was held Friday for a new communication site above Arnold. The tower will improve radio coverage and make the existing system more robust.

The need for improved infrastructure came to full light during the 2015 Butte Fire when there was damage to the power structure for one of the county radio sites, and in turn, it caused a domino effect failure at two additional sites (having served as a relay point). Meanwhile, another site that relies solely on solar power failed due to the large amount of a smoke casting a shadow over it. All in all, it caused a severe strain, and crippled what was left of the communications system.

Prior to the Butte Fire, there were plans being developed to look at ways to improve radio communication. A small group comprised of sheriff’s office Sgt. Wade Whitney, radio engineer Paul Shinn, a volunteer with the sheriff’s office, John Gomes and Oliver Tarap from Calaveras County Water District, Hans Weihofer, county IT, Deborah Mullen from the county transportation department, and Melissa Eads, from the Calaveras County Council of Governments, had been working to identify issues and potential solutions.

There were various locations owned by CCWD that were considered for the new communications site.

Shinn, who also serves as the head engineer at Clarke Broadcasting, donated his time and equipment to do real-world radio study from each spot, and then a final location was chosen.

The efforts received a boost thanks to a $108,000 grant from the American Red Cross to fund the project above Arnold. The new communication site both fills coverage area weak spots and provides scalable expansion capabilities for more first responder radio systems as they become desired in the future.

Several members from the county, sheriff’s office, CCWD, Red Cross, and others, were on hand for Friday’s ribbon-cutting event.