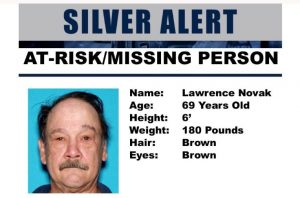 Original story posted at 8:40am: Sonora, CA — The Tuolumne County Sheriff’s Office is asking for the community’s help in locating a man that was last seen around 10:30pm on Friday near his home in the Ponderosa Mobile Home Park.

A Silver Alert has been issued for 69-year-old Lawrence Novak. Sheriff’s Office spokesperson, Sgt. Andrea Benson says, “He is experiencing memory issues and the possible onset of dementia. Lawrence was wearing a blue flannel shirt, jeans, and may have been wearing a hat. He is described as 6 feet tall, 180 pounds, with brown hair and brown eyes.”