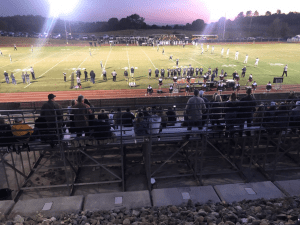 After a bye week, the Summerville Bears traveled to Calaveras High School.

After a magnificent kick return by Eliceo Avila, the ball was fumbled and given back to the Reds. They marched down the field and scored. The Bears received the kick and one play in, Nick Veach took the ball up the middle for a short gain. Although he came up limping. Veach’s injury will end his high school football career. He has made the football team a great place for all and will continue to be a great leader from the sidelines. Veach added afterwards, “There’s a lot of football left.”

2 minutes into the game the reds led 14-0. Chase Ryan had multiple punts throughout the game averaging about 35 yards. Josh Caldera also created space and had a few great runs. The Bears defense did not have enough power to defend against Calaveras’ split backfield. In the end, Calaveras beat the Bears 42-0.

Next week the Summerville will face of against the Argonaut Mustangs at Thorsted Field, Home of the Bears.

Sonora opened Mother Lode League play on the road at Argonaut with a win to keep their league undefeated streak alive.

The first Friday of October opened league play in a physical battle at Argonaut High. After both teams were stymied on their opening possessions, the Wildcats turned a Hunter Brewer interception off a tipped ball into 6 points by Hunter Foust capping an offensive drive from 2 yards out and the extra point would have Sonora up 7-0 at the end of the first quarter.

Nick Crockett would add a score from 1 yard, finishing a drive that saw the Wildcat offensive line dominating the line of scrimmage. Riley Keaster would add his second extra point of the night and Sonora would extend their lead 14-0. Argonaut would break the shut out on a 32 yard field goal from the right hash mark, and it would be 14-3 Sonora.

Sonora would continue the scoring, this time from the air on a beautifully thrown pass by Crockett to Gabe Milbourn 25 yards for the score. Keaster would tack on one more and the third quarter would end, showing the Cats up 21-3.

In the fourth quarter, the air and land assault would add to the scoreboard with Milbourn hauling in his second touchdown pass from 28 yards, the extra point would fail, increasing the score to 27-3. Riley Paz would add 6 more on a 4 yard run and Riley Keaster would add the final points to secure the Wildcat win; 34-3.

Sonora returns to Dunlavy Field Friday October 11 to face the Bret Harte Bullfrogs.It should be noted that originally scheduled as Sonora’s Homecoming game, the Wildcats will have Homecoming October 18 against Calaveras.

In other action, Bret Harte fell to Amador 42-0.