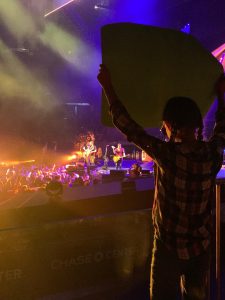 Makena Wallace’s mom Megan, a labor and delivery nurse who also serves as the vice-president of the Soulsbyville School Parent Teacher Organization, recounted earlier this week to Clarke Broadcasting a “surreal” experience for her fifth-grader daughter and family. It happened last Saturday during the second night of Church’s “Double Down Tour” stop in San Francisco.

Megan shares that since her daughter has been a toddler, she has put on aviator sunglasses, an accessory “The Chief” is known for constantly wearing, and then break out into his hits. “He is overall my favorite singer ever. I know pretty much all his songs,” Makena chimes in.

So before the family left for the Bay Area, Makena got the idea that she would create a sign, asking Church if he would sponsor her in a jog-a-thon fundraiser she participated in for a new playground structure.

“I told her it was a longshot…so she made a sign on her own…and her uncle took her down to a platform where she held it up,” Megan explains. “During one of his songs, he spotted the sign, came over, and asked for one of his security staff to retrieve it…after reading it out loud on stage, he said, pointing to himself, ‘I WILL sponsor you for your jog-a-thon’.”

Church subsequently made his way to the platform during another song, the Wallaces share.
“Towards the end, he came over to where…I was sitting and gave me a hug and shook my hand, which is pretty cool,” Makena confides. “Random concert goers in the crowd handed money to Makena to sponsor her for the jog-a-thon,” Megan adds. To view photos and (edited by Clarke Broadcasting) video captured by the family, click the link in the image box. Post-concert, Church happily posed for a number of photos with the Wallaces.

After several follow up emails between Megan, Soulsbyville teacher and PTO president Noelle Taylor, and Church’s staff, the singer learned more details about the fundraiser and confirmed that he and his family would fill out and return the jog-a-thon form. By Wednesday, Taylor heard back and emailed Megan the exciting news, which she received after waking up from her nightshift. At that point, only Taylor knew just how much the donation was for.

Plans were for Makena to open the envelope in front of a school assembly this morning and learn herself for the first time just how much the Churches sent — $10,000 — but the secret was spoiled, leaked on Thursday night by another media outlet. However, the show went on and Makena still had the opportunity to take the stage and help share the news.

“Just the experience has been absolutely amazing,” Megan says proudly, still clearly astounded. “And for Makena to put anything on her sign…she chose to raise funds for her school…and not something personal.”

The school has been raising funds for the past couple of years towards raising the estimated $110,000 needed to replace the school’s 20-year-old playground structure. The play area, while on school grounds, is open to and used by community members as a public asset.

According to Taylor, along with the jog-a-thon, the school continues to hold numerous fundraising events to chip away at the amount and had before this morning raised just over half. So, Church’s $10,000 check represents what might have well taken several months to take in.

The PTO is hoping to ramp up its fundraising efforts and hit the total needed by the end of the 2019-20 school year. Taylor notes all donations are tax-deductible. For more details, email ntaylor@soulsbyvilleschool.com.