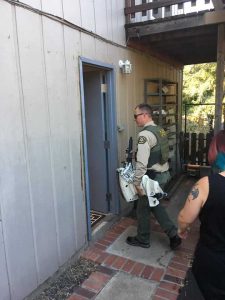 Sonora, CA — Deputies assisted by a homeowner made quick work of an alleged theft that led to fresh charges for two probationers.

Tuolumne County Sheriff’s spokesperson Sgt. Andrea Benson shares that a Sunday evening call to dispatch led to the deputies’ arrival at a home on McKamey Court in Sonora. There, the homeowner reported two boat motors stolen and additionally showed them surveillance video of two men in a white truck as they committed the theft and loaded the items onto a trailer.

Benson says the pair was identified as 38-year-old Steven Murphy and 37-year-old Jason Peluso, both of Sonora. Deputies shortly thereafter found the truck and trailer at Murphy’s home, and a search of Peluso’s residence turned up the stolen motors.

Both men who are on probation were arrested and booked into the Tuolumne County Jail for grand theft and conspiracy to commit a crime. Peluso is also charged with receiving stolen property. They both received a $20,000 bail. Deputies have since reunited the owner with his property.