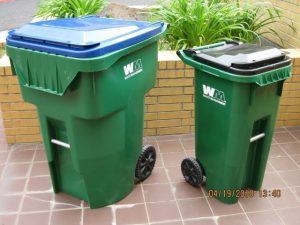 Sonora, CA — There will not be any immediate changes to the City of Sonora’s recycling program.

A proposal by CAL Sierra/Waste Management to drop the blue bag program for a two cart system failed to gain the needed votes Monday evening from the City Council. Mayor Bill Canning and Councilman Hank Russell were in support of the change, Council members Matt Hawkins and Ron Stearn were against, and Councilman Dave Sheppard was absent.

The Tuolumne County Supervisors voted to make the change to a two cart system for customers in the Waste Management jurisdiction earlier this year.

The proposal voted down Monday would have cost City of Sonora customers an additional $3.26 a month.

“The door’s been closed at this point, but it doesn’t mean that the decision can’t be revisited at some point,” says City Administrator Greg Applegate.

The proposal voted down also would have extended the City’s franchise agreement with CAL Sierra through 2023. The Council is expected to hold more discussion on recycling at upcoming meetings.