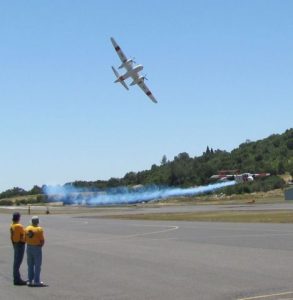 The 44th annual Father’s Day Fly-In at the Columbia Airport was a huge success. Many aviation fans were in attendance to celebrate 44 years of the event, as well as the 75th anniversary of the founding of Columbia Airport. Thanks to all the staff and volunteers who
show up every year this year was the best ever.

Four P51 Mustangs gave the crowd a thrill this year, including Ridgerunner, piloted by Dan Martin. Dan flies every year in the Reno Air Race Unlimited class and brought not only Ridgerunner but his L39 jet trainer. It’s not often that a jet can even land at Columbia, so
the crowd and the announcers were both surprised when Dan flew in from Reno and crossed the runway at over 400mph. Considering this was the weekend for the pylon racing seminars in Reno it was a great honor and a privlidge to have Reno race airplanes showing up at the Fly-In. Dan had only one comment as to why he came to Columbia; “Because I love it. I’ve been coming here for years and it’s a great place to spend a couple days!”

The CDF put on quite a show too with their famous breakaway flyby and the C131 flyover. As the C131 flew over the first time saturday, one of the announcers mentioned that the back hatch was open with a crewmember sitting on it. “I sure hope that isn’t the pilot!” he said, and the whole crowd laughed.

A very special flyover occurred for one airshow fan on Saturday. An 89 year old veteran, who was the last surviving member of his flight crew from WW2, was offered a ride in the t38. For the first time since he retired from the air corps he got to fly with the p51s and upon landing was spotted grinning from ear to ear. Every pilot at the airport, whether camping for the weekend or actually participating in the show, was touched by the story. Aviation may have changed in the past 75 years, but looking at the smiles on the faces of the young pilots it is easy to see the traditions will continue.

The Sonora RC Club gave a great exhibiton of radio controlled aircraft and helocopters. If a pilot’s licence is beyond reach then RC airplanes are the way to go. The Sonora RC Club showed how easy it can be to learn to fly straight up, or even upside down. And taking off within 15 feet is pretty impressive with a 6 foot scale model airplane.

According to Jim Thomas, director of operations at Columbia; “The important thing here at this event is to allow people to enjoy this day. It’s important to us here at Columbia to keep this event something that people will look forward to every year.” And Dominic Torchia, the Air Boss at the airport, said, “it’s a lot of work but well worth the effort.” And Fred, who coordinates all the volunteers… “It is due to dedicated people such as these that Columbia is becoming a favorite destination for father’s day.”

We can only hope this tradition will continue. Columbia is a wonderful event for all who attend. With a bit of luck and some fast airplanes this will continue to be one of Toulumne County’s premiere events of the summer. And if you feel like spending a lovely summer’s day seeing some very fast machines in the air, feeling the propwash in your hair and the smell of avgas in the air… Columbia Airport is the place to go.