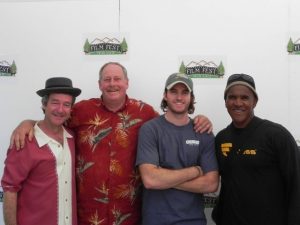 Around 20 films were shown at the three day event held at Eproson Park, the American Legion Hall, Black Oak School and the Twain Harte Golf Course. Celebrity guests included Jeffrey Weissman, who played George McFly in Back to the Future II and III, and Jack McGee who recently played the boxing coach in the Mark Wahlberg film “The Fighter.”

The following awards were handed out to films that stood above the rest: