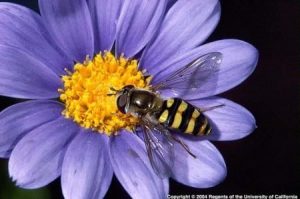 Insects need all the public relations they can get, and flies need even more than most. The word “fly” usually inspires the thought of flyswatters and spray cans. Hover flies, however, are a gardener’s friend.

Hover flies go by several names, but “hover fly” is the most descriptive. Hover flies are also called flower flies or syrphid flies since they belong to the Syrphidae family of insects. The largest hover flies are only three-fourths inch long, though many are so small they are rarely noticed. If you look closely, they can be seen hovering like helicopters above flowers and over plants with aphids.

Many of the hover flies in my garden are camouflaged with black and yellow bands on their abdomens (the rear section of an insect). These markings are similar to those of wasps and bees and are thought to be designed to fool the hover flies’ enemies. Actually, hover flies have no stinger and are quite safe to hold in your hand. I also see a number of hover flies with a dark reddish abdomen.

Hover flies are gardeners’ friends because their larvae, resembling small caterpillars, eat other small insects, mostly aphids, by the dozens. On top of that, adults require nectar and pollen for egg laying and for their own survival, and thereby pollinate many flowering plants while searching out their own supper. If all goes well, some hover flies produce several generations each year.

WELCOMING HOVER FLIES TO YOUR GARDEN: All in all, hover flies are among the most useful natural enemies of your garden’s pests. Here are three tools for making them at home in your garden.

Since many hover fly larvae pupate and overwinter in the litter and mulch surrounding plants, a layer of mulch is the second technique for encouraging hover flies to return in the spring. (Remember, mulch also helps reduce weeds and summer watering.)

The third way to attract hover flies is with plants and trees flowering over a long season. Willows, grasses, and sedges that produce early spring pollen are especially helpful in controlling early outbreaks of aphids. And, I often see hover flies around many of my native plants, including California poppies.

Other popular flowers include sweet alyssum, a reliable old standby that blooms almost all year long and reseeds itself with little help from the gardener. Cosmos, too, is well-liked, as are asters for late season bloom.

It’s a bug-eat-bug world out there, and hover flies are voracious warriors in the bug arms race. Invite them into your garden to help make your gardening easier, healthier, and more satisfying.

Vera Strader is a Sonora Master Gardener who, over the years, has spent many hours “bug gazing.”