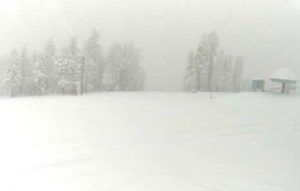 The storm system arriving today will produce several feet of snow in the Sierra Nevada, accompanied by high winds leading to blizzard/whiteout conditions.

A Winter Storm Warning for the Sierra Nevada above 5,000 feet, remains in effect until 4 AM Friday.

Additionally, a rare Blizzard Warning has been issued for the Sierra Nevada above 6,500 feet, from 7 PM Wednesday through noon on Thursday.

Total snow accumulations above the 7,000 foot elevation, will range between two to six feet.

Winds gusting to as high as eighty-five mph, will cause blizzard/whiteout conditions in blowing snow. This could also cause extensive tree damage.

A High Wind Warning has been issued for the Mother Lode, which is in effect from 4 PM this afternoon to 2 AM Thursday.

Winds of twenty-five to thirty-five mph are expected with gusts ranging from fifty-five to sixty-five mph.

Some of the probable impacts will include power outages, downed trees and difficult driving conditions.

Additionally, a Wind Advisory is in effect for the Northern San Joaquin Valley, from 4 PM this afternoon to 2 AM PST Thursday.

Winds of twenty-five to thirty-five mph are likely with gusts ranging from forty-five to fifty-five mph.

Also, a Flood Watch remains in effect for both the Mother Lode and the Northern San Joaquin Valley, from this afternoon through Thursday morning.

Rainfall amounts of one to two inches is possible in the Central Valley. Two to four inches of rain is forecast for the Mother Lode.

Periods of heavy rain, along with the strong winds, will make driving difficult.

Finally, a Flash Flood Watch has been issued for the Sierra Nevada below 7,000 feet, from this afternoon through Thursday evening.

Heavy rain may lead to excessive runoff, rising water levels on area rivers and streams and present the threat of flash flooding.

A High Wind Warning means a hazardous high wind event is expected or occurring. Sustained wind speeds of at least 40 mph or gusts of 58 mph or more can lead to property damage.

A Wind Advisory means that winds of 40 mph are expected. Winds this strong can make driving difficult, especially for high profile vehicles. Use extra caution.