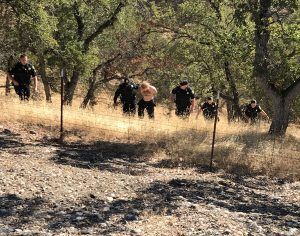 San Andreas, CA – Following an altercation with two females at a Valley Springs residence, deputies arrested a man for two alleged violent felonies, jailing him on a $125,000 bail.

According to Calaveras County sheriff’s officials, deputies responded yesterday morning around 8:15 to a residence in the 6000 block of Highway 26 and spoke with the women, whose ages are 21 and 22. They recounted visiting 28-year-old Nicholas Kohring at the location, arriving after being at an out of county bar the night before.

Officials state the two women told deputies that Kohring threatened and prevented them from leaving. While the responders were still doing their preliminary investigation, a male matching Kohring’s description was seen running shirtless from the back of the home.

They add that several deputies signaled him to stop using their patrol vehicle lights and an air horn but he continued fleeing on foot through neighboring yards. Setting up a perimeter, they finally were able to detain him in a nearby field.

Following questioning, Kohring was subsequently arrested for false imprisonment with violence and threatening a crime with intent to terrorize as well as for battery, resisting arrest and being under the influence of a controlled substance. Officials note that alcohol and narcotics use is suspected to be a factor in this case.