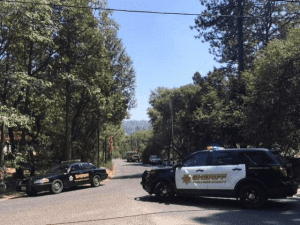 Update at 3:15pm: Tuolumne County sheriff’s officials report that two residential road closures in the Crystal Falls area are back open following a fire in the neighborhood.

Expect remaining fire units to be on scene as cleanup continues. The cause of the incident is still under investigation.

Update at 1:35pm: Residents of a home in the 17400 block of Smokey River Drive safely escaped a fire that broke out somewhere inside late in the noon hour.

CAL Fire spokesperson Emily Kilgore states that fire officials on scene report they have “pretty good knock down” on the fire, meaning they are still working on it but it is not completely out yet.

She adds that the Red Cross was called to assist the residents and that she expects units to remain on scene for a couple of hours yet as they work to completely extinguish the blaze and backhaul debris from the fire area. The cause of the incident is still being investigated.

Meanwhile, the Tuolumne County Sheriff’s Office has a temporary road closure in place at Smokey River Drive and Longeway Road as well as at Red River Drive. Sheriff’s officials commend the firefighters’ quick and efficient response.

Update at 1:05pm: CAL Fire officials report that a residential fire that broke out in the Crystal Falls area has been contained in the building where it reportedly began.

CAL Fire spokesperson Emily Kilgore adds that units are still actively working the incident, which is in the vicinity of Smokey River Drive and Longeway Road. You will want to avoid the area at this time if at all possible due to firefighting activity and other responding units.

Original Post at 12:55pm: Sonora, CA — Air and ground resources are responding to a report of a fire in the vicinity of Smokey River and Longeway roads in the Crystal Falls area.

CAL Fire officials say as units are still arriving it is unknown whether reports of smoke are coming from vegetation or the back of a building. We will bring you more details as they come into the news center.