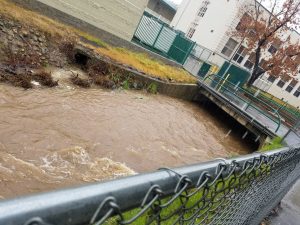 Update at 5pm: The CHP is reporting two to three trees crashing down on Highway 26 near the Paloma Road intersection in the Mokelumne Hill area of Calaveras County. The trees are blocking the entire roadway. Further incidents causing hazards in the Mother Lode can be viewed below.

Update at 4pm: The CHP is reporting that Old Priest Grade is closed due to the poor driving conditions. Due to the heavy snow, Tuolumne County Transit has cancelled its Bus Route 2 for the afternoon that runs from Sonora to Sierra Village. Anyone who came down on the bus earlier today, and needs a ride back up, should contact Tuolumne County Transit at 532-0404. The pouring rain has caused creeks in the area to rise close to the top of their banks. The picture in the image box shows Wood Creek that runs by Sonora High School with rushing water.

The CHP is releasing new details on a bus that slide of the roadway with students on board in Calaveras County. The incident happened at the intersection of Railroad Flat and Jesus Maria roads. The CHP reports the bus was hanging off an embankment. All the students were safely removed from the bus. A tow truck pulled the bus back onto the road. The CHP indicates that the students were loaded back onto the bus and taken to their homes. Luckily, none of the children were injured, according to the CHP.

Original post at 2:30pm: Sonora, CA — Mother Nature is pounding the area and creating hazards in the Mother Lode.

In Calaveras County, a school bus has gone off the roadway at the intersection of Railroad Flat and Jesus Maria roads. The CHP reports the bus is hanging off an embankment, but indicates that all of the students have been removed from the vehicle.  There are no details on any injuries at this time.  A tow crew is heading to the scene but traffic is slow going in the area.

Additionally, heavy snow falling in the Arnold area caused part of a home’s roof to come crashing down. CAL Fire Tuolumne-Calaveras Unit firefighters assisted Ebbetts Pass Fire Protection District to recue one person that was trapped in a room. They were not injured, according to CAL Fire.