The Mosses and Bogs of Ireland 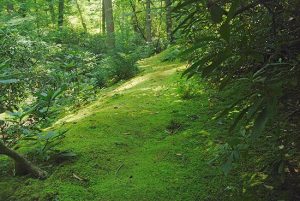 The day after St. Patrick’s Day, thoughts linger on all things green and Irish. The misty mornings and foggy afternoons of Ireland nurture and grow the mosses and plant life that give rise to its sobriquet, “the emerald isle.”

The poet, Henry Wadsworth Longfellow wrote:
This is the forest primeval. The murmuring pines and the hemlocks,
Bearded with moss, and in garments green, indistinct in the twilight,
Stand like Druids of old, with voices sad and prophetic…

Out of the mists of ancient Irish folklore come fairies, sprites and, more recently (17th Century), leprechauns. These are all vegetation beings born from the rich green mosses, bogs and forests of Ireland. They are a personification of Nature.

Mosses and peat bogs are an integral part of the Irish landscape. According to the University of California Cooperative Extension website (http://ucanr.edu/sites/ucceventura/gardening/coastal/landscape_578/moss/), “Mosses are primitive, non-flowering, rootless green plants with simple stems and leaves.”

Irish moss (chondrus crispus) isn’t really a moss at all, but an alga, or seaweed, also known as carrageen moss (translation from Irish, “little rock”). It grows off the rocky coasts of Ireland, Europe and North America. The ancient Irish traditionally carried it as a lucky charm or hid it under floors to bring good luck to the home.

This “moss” takes its nutrients directly from the ocean, making it a powerful antioxidant. It is used as a thickening agent in puddings and drinks. The Irish strain it into milk; add vanilla and it thickens into a pudding. It is also used as a fertilizer for agriculture and gardening.

Another kind of Irish moss is Sagina subulata. This Irish moss grows in rocky, sandy areas and has tiny white star like flowers in spring. It is widely used in garden paths and borders and in shady areas. It is sold locally in nurseries.

The peat bogs of Ireland formed when plant material wasn’t fully decayed and sat in acidic, anaerobic (lack of oxygen) conditions for thousands of years.  They are composed mainly of marshland vegetation – principally bog plants, including mosses, (primarily sphagnum moss) sedges, and shrubs. These peat bogs have taken thousands of years to produce the present-day peat. Peat is dried and used as fuel for homes and industries.

Peat bogs are an essential part of the biodiversity of the wetlands of Ireland. They provide an important stopping-off point for migrating birds. Because peat bogs are often thousands of years old, they contain layers of historical data.

Bog bodies have been preserved and mummified by the lack of air and the acidic surroundings. The acidic bath of the bog acts like vinegar or formaldehyde. These bodies have provided a wealth of information about the practices of the Druids’ human sacrifices and about the diet and health of the ancient Irish.

The mists, fogs and rain are what feed and water the peat bogs, mosses and vegetation of Ireland, and are what make this island nation so green. As we celebrate St. Patrick’s Day (The Irish don’t traditionally eat corned beef and cabbage, by the way – it is a New England dish), don’t forget to wear green so you won’t get pinched, and you will be reminded of the lush bogs and mosses of ancient Eire.

UCCE Master Gardeners of Tuolumne County can answer home gardening questions. Call 209-533-5912 or go to: http://ucanr.edu/survey/survey.cfm?surveynumber=7269 to fill out our easy-to-use problem questionnaire. Check out our website at: http://cecentralsierra.ucanr.edu/Master_Gardeners/ You can also find us on Facebook.