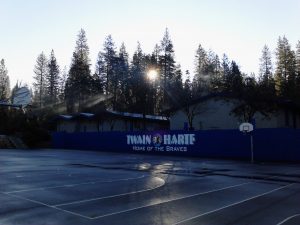 Update at 5:30 p.m.: A suspect remains at large after sparking a search and a school lockdown in the Twain Harte area around 2 p.m. The man took off running after a deputy made a traffic stop near Twain Harte Elementary. Deputies were able to confirm that the suspect was no longer on or near the campus after about 20 minutes of combing the area and the lockdown was lifted. Further details and a description of the suspect are below.

Update at 2:45 p.m.: Tuolumne County Sheriff’s officials report that a lockdown at Twain Harte Elementary has been lifted and confirmed that a male suspect is no longer on the campus. Deputies continue to search for the suspect. Details regarding the search and lockdown are below.

Sheriff’s officials report that a deputy made a traffic stop near Twain Harte Elementary located at 18815 Manzanita Drive. Two men were inside the vehicle. One of the males was arrested, but the other man took off on foot. Sheriff’s officials describe him as a white male who is  heavy set. He is wearing, blue jeans and a dark blue shirt. Currently, deputies are searching the area.

The elementary school was placed on lockdown as a precaution while the investigation is going on.  Deputies will remain on scene to make sure the students are safe, according to sheriff’s officials, who add that they believe the male subject is off the campus at this time. We will update you on this story as soon as further details come into the newsroom.