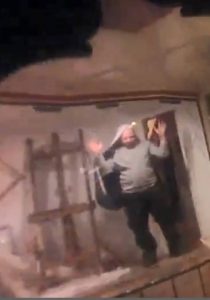 Sonora, CA – A burglar was caught red handed trying to break into a downtown Sonora building early this morning.

Neighbors woken by the sound of breaking glass reported a possible break-in to Sonora Police around 2:30 a.m. on Thursday. An officer was dispatched to a downtown Sonora building located at 101 South Washington Street and found shattered glass on the sidewalk. Behind the broken display window he discovered 34-year-old Alfred Gumpferpabilona of Sonora attempting to bust through a door to gain access to the building. Pointing a taser at the suspect, the officer ordered him out onto the sidewalk to wait for back up.

A search of Gumpferpabilona followed, which turned up marijuana, hydrocodone, and clonazepam. He did not have a prescription for those drugs, according to police. Officers then determined that he was under the influence of drugs and/or alcohol. Gumpferpabilona was arrested for burglary, felony vandalism, possession of narcotics and public intoxication. His bail is set at $15,000.