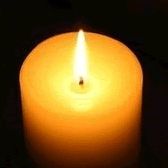 Sonora, CA – Attempting to raise awareness about gun violence in the nation a candlelight vigil will be held at Courthouse Park in Sonora this weekend.

Calling it an national epidemic, the group, Organizing For Action (OFA) Mother Lode, point to the gunning down of 17 high school students and staff at Marjory Stoneman Douglas High School in Parkland, Florida last week along with the fact that since the Sandy Hook tragedy in 2012 over 500,000 Americans have been killed or injured by guns and more than 33,000 are killed by guns every year, for why grass roots action is needed. Citing that nine out of 10 Americans support expanding background checks, the OFA press release criticizes that Congress has repeatedly “shamefully failed to stand up to special interests who want to maintain the status quo. That’s why we’re taking the fight to the state and local level, where Americans can raise their voices at home in their communities.”

One key objective the group is pushing for is expanding background checks, which they argue is a common-sense measure expounding on statistics that found nine out of 10 Americans—including an overwhelming majority of gun owners—support the checks. OFA calls on federal and state lawmakers to close the loopholes and pass measures to strengthen the background check system.

The vigil will begin at 5 p.m. and run until 6 p.m. Sunday, Feb. 25th at the Courthouse Park in Sonora. Organizers say those that wish to participate should bring along a candle and sign.