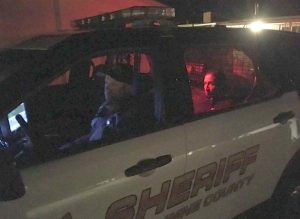 Jamestown, CA – An elderly assault victim reported losing consciousness while a suspect threatened to attack her with a hammer and set fire to her home.

The 65-year-old woman was originally attacked on Monday, February 12 in Sonora at home on Allison Way off Highway 108. During questioning she told Tuolumne County Sheriff’s Deputies that 42-year-old Jacob Spiller allegedly pulled her hair and put her in a chokehold until she lost consciousness. When she threatened to call 911 she says that he threatened to hit her in the head with a hammer and then set the home ablaze with the victim and her dog inside. Spiller took off before deputies arrived at the home.

Sheriff’s officials revealed that a tip led deputies to a trailer at the Woods Creek Mobile Home Park in Jamestown where Spiller was apparently hiding out. Deputies entered the home and caught Spiller while he was napping on a couch. He was arrested for elder abuse, criminal threats, false imprisonment, and assault with a deadly weapon. His bail was set at $40,000.