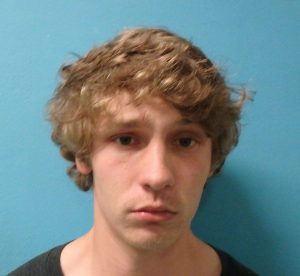 Sonora, CA — The Sonora Police Department reports a teen was arrested for assault with a deadly weapon and battery causing serious bodily injury.

Over the past week the police department has been investigating an alleged assault that occurred at a party that took place at an abandoned sawmill at 355 Hospital Road. 18-year-old Kaliem Sage Campau of Sonora allegedly pulled a 14-year-old victim off an elevated area, causing the person to fall several feet. The PD says he then punched the victim in the face and kicked the person in the head, causing a loss of consciousness.  The victim sustained serious injuries as a result of the assault. After investigating the allegations over the past week, Campau was located by the police department yesterday afternoon and taken into custody. He is being held in Tuolumne County Jail on $50,000 bail for felony assault charges.