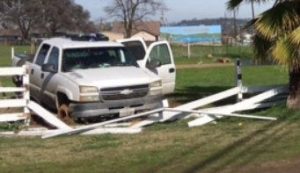 An alarm sounding at the Sender’s Market Ace Hardware store located at 129 Highway 12 in Valley Springs around 3:15 a.m. Friday brought deputies to the scene where they discovered burglars had cut through a fence to gain access to the building. As deputies continued to check the property they found a broken door where the thieves got into the business. A check of surveillance video showed two suspect,s wearing dark clothing, masks and gloves, carrying off chainsaws, clothing and power tools from the store.

While searching the nearby area, deputies came upon a strange scene of a pickup truck that had smashed through a picket fence and the driver was nowhere to be found. Investigators knocked on the door of a home on the property and once inside spied some of the stolen goods. Behind the house, deputies also uncovered and traced tracks that lead from the residence right to damaged fence and store.

48-year-old Phillip Schmidt of Waterford, who sheriff’s officials believe was driving the truck, was taken into custody for burglary after more of the stolen products were found in the crashed vehicle. Methamphetamine was also found on him adding additional drug charges. Schmidt’s bail is set at $50,000 bail. 34-year-old Jamie Smith of Valley Springs was arrested for being under the influence of a controlled substance and child endangerment. A small child was taken from the home after Child Protective Services were called to assess the living conditions. While searching the residence, 39-year-old Joshua Hawkins, also of Valley Springs, was found hiding in the home’s attic. He was arrested for several outstanding warrants, but no further information regarding those crimes was released by sheriff’s officials.

The estimated value of the stolen goods is around $4,500, according to detectives that indicate the investigation is ongoing. Anyone with information related to the burglary are asked to contact the sheriff’s dispatch at (209) 754-6500 or the anonymous tip line at (209) 754-6030.