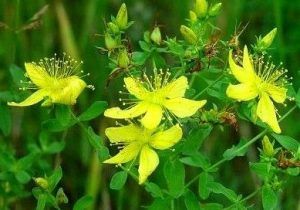 St. John’s wort was so named because it blooms around June 24; the day traditionally celebrated as the birthday of John the Baptist, and is his feast day. Also, in times past, on the eve of St. John’s feast day, people burned the plant to ward off evil spirits.

On the other hand, many scientists and farmers think that the plant itself is evil because of its invasive nature. Hypericum perforatum is toxic to cattle and other livestock. It is also known as Klamath weed because it invades pastures and roadsides of northern California and Oregon. The plant causes animals that eat it to be highly sensitive to sunlight. After eating the plant and being exposed to direct sunshine, the animals develop painful sunburns.

Young sheep and cattle, as well as horses, are especially affected. In areas of the body with bare skin or white hair, the effect is severe. Lesions develop on the udders of cows. This causes them to stop lactating and forces the weaning of young calves, as well as the end of the farm’s milk production. Although it is seldom lethal to livestock, it causes enormous economic losses to farmers and to the cattle industry.

Herbicidal remedies have proven useless against this variety of St. John’s wort. In 1946 the leaf beetles, Chrysolina quadrigeminia Rossi, were introduced. These beetles’ voracious appetites for the weed reduced the stands of St. John’s wort to 1% of their original numbers in the US.

A close relative of Hypericum perforatum, and the one gardeners are most familiar with in the Mother Lode, is Hypericum calycinum, also called Aaron’s beard. This is sold as a ground cover in local nurseries and it is ubiquitous in Twain Harte and Mi-Wuk Village, as well as in lower elevations of Sierra Nevada gardens. This is not listed as an invasive plant by the United States Department of Agriculture, and is not toxic; but, once planted, it is hard to get rid of. It is rhizomatous (underground shoots that have nodes, and from these nodes new plants sprout up) and has a tap root and vertical roots which can extend down to 5 feet. When you try to pull it up, it just breaks off underground and the remaining nodes will sprout new shoots.

Once this plant is established it is likely there for good. It will take over some other garden plants and will outlast almost anything else in the garden. But, to its credit, it will hold a hillside in place through a rainy winter and its yellow flowers attract pollinators to the garden. I have a hillside of these plants and, as long as I keep them cut back, they are manageable. But, one day, after I leave this property, they will probably take over everything else unless someone else keeps them in check.

It is clear that St. John’s wort is a tenacious plant in any of its forms, even though some species may not be out-and-out invasive. So, if you are considering buying it for your garden, beware and forewarned about its properties!