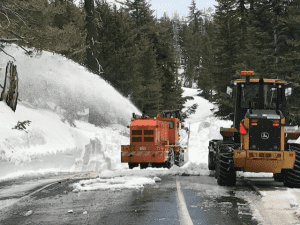 Sonora, CA — As crews continue to busily crank away at clearing the Mother Lode mountain passes, Caltrans officials confirm today neither one is near ready to open.

Most years the Highway 4 Ebbetts and Highway 108 Sonora passes open on or ahead of the Memorial Day weekend but the deluge of wet weather this past winter has left crews with some extraordinarily challenging  clean up chores.

Providing the latest update, Caltrans District 10 spokesperson Rick Estrada states that his office is anticipating that Ebbetts and Sonora passes will open in three to five weeks. This effectively moves plans for any public traveling over those hills out into late June or early July, although Estrada emphasizes that his department is extremely sensitive to the importance of those roads to local travelers and the region’s tourism trade.

That is why, he says, that since early April, two four-man crews are continuing to work 24/7. Along the way they are encountering snow drifts up to 40 feet high due to avalanches that have sent hillsides of snow, boulders and whole trees with roots still connected spilling down into the roadways. (To view images of some of these efforts click into the image box slideshow.)

Besides pushing snow, blasting fallen boulders and clearing huge debris loads, Estrada says repairs are underway and more damage is still being uncovered. Too, once all those issues are addressed, both roadways will need to undergo a final inspection before they are finally ready to swing the pass gates open.

Currently, eastbound travelers are able to get to the east end of Lake Alpine on Highway 4 and to Kennedy Meadows on Highway 108. Estrada notes that it is only the second time in a decade that Ebbetts Pass has not opened in time for Memorial Day and the first time in that long for Sonora Pass.

As reported here, Yosemite National Park officials report that Highway 120 Tioga Pass is in a similar state and have not given a timeline for it to open.