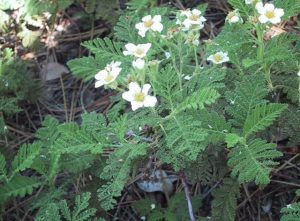 It grows up and down the western slopes of the Sierra Nevada, grabbing hold of whole hillsides, oozing a pungent sap that sticks to your clothes and skin. Most animals avoid it because of its smell. It sounds like a science fiction creature, but it is mountain misery (Chamaebatia foliolosa). It is also called bear clover, bearmat, or the Miwok Indians called it kit-kit-dizze.

It grows only on the western side of the Sierra at elevations between two and seven thousand feet. It is a member of the rose (Rosaceae) family and blooms in May through June. It has tiny white flowers with bright yellow stamens in the middle and covers vast areas under Jeffrey pine, Ponderosa pine, Douglas fir, Manzanita, Pacific dogwoods and incense cedars.

Mountain misery sucks up the moisture from the spring melt so tree seedlings can’t grow, yet it is a very important selective agent in the building of a healthy forest. It ensures that tree seedlings are well spaced and don’t crowd each other to become weak saplings. It also holds the duff in place and provides natural seed beds.

Forest managers are caught in a dilemma: on the one hand, mountain misery impedes the growth of conifer seedlings; on the other, it acts as an excellent slope stabilizer. Its rhizomes spread underground up to five feet deep and have been measured up to 82 feet long. Because of its tenacious rhizomes (underground specialized horizontal stems that have nodes, or buds, differentiating them from roots), it can hold whole hillsides in place and prevent erosion during heavy rains. This is especially important after a forest fire, when much of the vegetation has been burned away, leaving hillsides vulnerable to slides. Mountain misery’s recovery from fire is rapid. It grows back in only three years after a top-kill forest fire and prevents runoff and landslides.

Some Sierra gardeners consider it a bane because it can invade even the hardiest of gardens, and can outlast almost any other plant in a drought. However, it is quite pretty and some gardeners find it aesthetically very pleasing. At one garden site on the Master Gardener Garden Tour a few years ago, the most commonly asked question was, “What is that beautiful, fern-like ground cover?” It was mountain misery.

Its resinous leaves are highly flammable, especially when draped with fallen pine needles and other forest debris. A forest fire will almost explode along its leaves. Mountain misery’s thicket-like intertwined stems make it difficult for fire fighters to cut through it in order to establish a fire break during a forest fire.

Deer reluctantly graze on it after the autumn rains have washed the oily secretions away. It is the main source of food for black-tailed deer during their winter migration. They paw through the snowdrifts and graze on it when other vegetation has gone dormant or died back. Its absence would surely threaten their survival.

The Miwok Indians made a tea from it that was taken for rheumatism, colds, chicken pox and other diseases. I tried it and concluded that it is definitely an acquired taste!

Eradication is difficult, though it is sensitive to foliar spraying of phenoxy herbicides. It requires repeated applications because it will sprout vigorously following only one or two treatments. Pulling it up like a weed just encourages it to germinate twice as fast. The best method of eradication is to apply an herbicide in the spring to early summer during the period of new leaf initiation.

So, love it or hate it, it is here to stay. Mountain misery is a truly native plant that is found nowhere else in the world. We must remember that any eco-adapted life form may have a place and benefits that we humans don’t understand or even recognize.

Francie McGowan is a University of California Cooperative Extension Master Gardener of Tuolumne County who has made her peace with mountain misery.